During his closing remarks at the October 2020 General Conference, President Russell M. Nelson announced a new temple in Vanuatu. BYU–Hawaii students, faculty members and Church members in Vanuatu said they felt indescribable joy because of the announcement and said it is a blessing for the Vanuatu people.

Reactions of joy from the announcement


It was an exceedingly great joy to hear the announcement from President Nelson, said Mariella Delaplane Kaun, a member in Vanuatu. “I realized that He was fulfilling His promise that if we lived worthy and could not go to the temple, then the temple would come to us,” Kaun added.

Dack Tivles, a district clerk in Vanuatu, said “It was an indescribable feeling and a moment that will be cherished for a lifetime when President Russell M. Nelson announced Vanuatu will now have a temple built in [our] land.

“Members of the church in Vanuatu were delighted and perhaps blissed to hear the announcement.”

Tivles expressed his gratitude to the pioneers of the gospel in Vanuatu and said, “I become emotional when I think of the members of the Church in Vanuatu who might have given everything just to get to the temple in Fiji or New Zealand.

“For some, it might just be once in a lifetime. Some of us could not even make it to the temple for financial purposes. Now we are blessed to have the house of the Lord built in our land. For that, I am eternally grateful.”

I become emotional when I think of the members of the Church in Vanuatu who might have given everything just to get to the temple in Fiji or New Zealand.

Christina Akanoa, an associate professor in the Faculty of Business & Government, said, “When our Prophet made the announcement on Sunday about building a temple in Vanuatu, I was emotional thinking about all our Vanuatu students, especially my students and this great blessing on them and their people.”

During the announcement, Akanoa said she “thought about how faithful they are as members, and this is a sign and reward of their faithfulness and diligence. I was very happy for them.

“I also thought it’s about time. The saints of Vanuatu have been ready. In all of the Pacific region the gospel is growing,” she added.

While expressing her thoughts on the historic announcement, Kaun stressed, “During COVID-19, I prayed so much to have the temple near, closer to the home, where I would have a quiet place to meditate, to gain strength and be able to do what the Lord was asking me to do.

“The Lord answered my prayer, and because of that, I am eternally grateful,” Kaun said.

Bryan Estall, a sophomore from Tahiti majoring in biology and a returned missionary from the Vanuatu Port Vila Mission, said it was a heartfelt and an “emotional moment” hearing the announcement from President Nelson.

Estall emphasized his joy for the blessings of participating in temple ordinances now being accessible to Church members in Vanuatu.

Zaph Villanueva, a freshman from the Philippines majoring in marine biology, said his heart was filled with so much joy when the announcement was made for a new temple. “I offered a silent prayer in my heart, expressing gratitude to God for making this miracle happen,” he noted.

As a returned missionary from the Vanuatu Port Vila Mission, Villanueva expressed, “We worked so hard with the saints in Vanuatu to hasten the Lord’s work, and I am super happy to hear they will have a new temple in their land. They deserve it.” 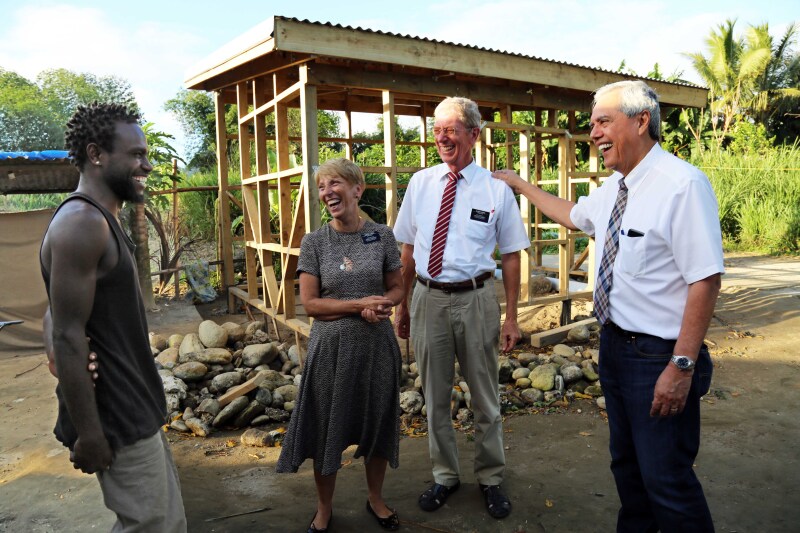 2 of 2
IMG-4284-Pics-of-Elder-O-Riordan-and-all-the-delegates-attending-the-Malekula-District-Conference-held-at-Pinalum-village-North-East-Malekula-on-January-22nd-2017@0,75x.jpg
Photo from the Church Gospel Media Library
1 of 2

Hastening the work of the Lord


Akanoa said she saw faithful members in Vanuatu make sacrifices in their lives to fulfill their callings and to minister to others to hasten the work of salvation in the world.

“This is why they are blessed with a temple,” Akanoa said. “The numbers are growing in the Church in Vanuatu. We have many [returned missionaries] who have served missions and are now contributing to building the church in Vanuatu.”

Kaun said, “Our part in hastening the work of salvation is to be firm and stand strong in defending the truth.”

She emphasized, “The increasing desire to seek an academic education, to seek spiritual education through seminary and institute is pleasing to the Lord, whose glory is intelligence, as stated in the Doctrine and Covenants.”

Kaun advised students to “stay strong in getting and finishing your education. The Lord needs you in his great work to influence and contribute to the work of salvation.”

The Lord needs you in his great work to influence and contribute to the work of salvation.

Estall expressed his thoughts on the announcement as being evidence of the gathering of Israel. “I am a returned missionary of the Vanuatu Port Vila Mission. Seeing how much the saints had worked, I’m grateful they are going to do more temple work in contribution to the gathering of the house of Israel on both sides of the veil.”

He said this would be a great blessing for the people of Vanuatu, especially reducing the cost of traveling to other countries to receive the ordinances of the gospel.

Marveling over the historic announcement, Tivles added how the Lord is doing a marvelous work in His own time and wisdom. “I have always thought we need to have a few more stakes in order to qualify for the temple to be built in Vanuatu, considering we only have one stake in Vanuatu, which is Port Vila.”

Tivles said non-members of the Church have asked about the significance and why they’re so happy about the announcement. “I believe it was a great blessing the temple brings to not only Church members but people who wanted to know more about the Church.

“Now they will learn more about the temple, why we worship in the temple and why we have such great pure joy when we heard of the announcement.”

Preparation and call to action


Speaking about preparation as an integral part of the gospel, Akanoa offered advice to BYUH students as well as the saints in Vanuatu. “Prepare spiritually and physically to enter the temple. You have a lot of work to do for those on the other side of the veil.

“Reach out to others and minister to those who might need help understanding the importance of the temple.”

As a professor at BYUH, Akanoa said, “We encourage our students to participate, be good citizens, do your civic duty, and take on leadership roles both private and public. … With the temple being built in Vanuatu, they now have another big responsibility added to their plate: to help bring people to the Lord’s house.”

As a call from the Lord, Kaun explained, “Heavenly Father is hastening His work in miraculous ways. The Church in Vanuatu is still in its younger years, where membership may not meet Church policies to qualify for a temple, and yet, He is having a temple here. It is a reminder to the members of their important part to hasten His work in Vanuatu.”

Kaun expressed, “I believe that my testimony, my desire to serve, and my determination to serve has had an influence on the people around me.” She said it was her prayer members will live a life of obedience and service in preparation for the temple.

Villanueva explained, “I heard and learned stories from the people of Vanuatu about their ancestors and their past generations. Many of whom had passed without the gospel. I am filled with gladness, excitement, and hope to learn of this new temple on their island, and now, temple work will be done for them on the other side of the veil.”

Tivles added, “I hope we will all remember those sacrifices and be prepared in doing more genealogy work, for the day will come when we shall welcome the house of the Lord, and we shall be prepared to serve.

“I know as we prepare and are worthy of the constant companionship of the Holy Ghost, we will be better prepared to enter the holy house of the Lord.”