After years of suffering from a debilitating medical disorder that causes painful muscle spasms, Jennifer Kajiyama Tinkham said her testimony of God’s love and His divine plan helped her through the darkest moments of her life.

“My life is so different now. I can chew. I can smile. I can talk ... [Don’t] let the chaos and the uncertainty and the fears of the world overcome the comfort that comes only from the Savior, Jesus Christ.”

Although she has had an accomplished career, Tinkham, an adjunct professor in the Faculty of Business & Government, said she recognizes the limitations and difficulties this life often presents. “Everyone goes through their own unique challenges, but God is definitely in the details of our lives.”

In 2012 Tinkham was diagnosed with a debilitating medical disorder called hemifacial muscle spasm. “It started off with a flutter in my eyelid. And for most people, it will go away, but mine got progressively worse,” she said.

As time progressed, so did the disorder, explained Tinkham. “It started going down my face. From my eyelids to my nose, to my cheek, to my mouth, and then kind of by my chin and then down to my neck and shoulder.” These spasms led to severe migraines, pains to the right side of her face, and muscle distortion.

Hemifacial muscle spasm is a disorder of the nervous system that causes the muscles on one side of the face to twitch involuntarily. In a 2018 BYU–Hawaii devotional Tinkham said, “Movement of my face or my mouth or stressful or high-energy situations would trigger my spasms, which would not let up for several hours.

“Sometimes, the spasms would continue through the night while I was sleeping. Just imagine having your eyelids rapidly open and close all day and night.”

Tinkham said the condition often left her face tired and in pain and she said simple things like smiling, looking people in the eye, and even teaching were all challenges. As a teacher, Tinkham said she was left standing every day for hours with “my face, my mouth, and my shoulder spasming.”

Although Tinkham described herself as outgoing, she said, “I would wake up [every day], and I would pray to have [the] courage to teach and to look people in the eye.”

Tinkham recalled one night in particular when her spasms became almost unbearable. She said, “I had been asked to give a talk in church. I was working on my talk, and I had a really bad muscle spasm attack on my face. I couldn’t sleep because it was just so painful.”

The pressure of speaking the following day, paired with her inability to sleep, perpetuated the spasms. Tinkham recalled saying, “Heavenly Father, why? I’m doing what you’re asking me to do.”

The next day in Church, Tinkham prefaced her talk by explaining her condition to her fellow ward members. “Little did I know that when I shared my talk in my ward, there was a woman who had the exact same thing. She had hemifacial muscle spasms as well,” she said.

Tinkham said, “She heard me talk about it in church, and then at a ward activity, she came up to me and talked to me about the surgery she had. She had gotten it a couple years before, and she was completely cured.

“She told me about this doctor, and it was a surgeon I had been trying to get a hold of for a really long time. Every time I tried to make an appointment, something would happen. I just figured that doctor just wouldn’t ever be someone I’d get to see.”

The woman from the ward called the surgeon’s office and told them of Tinkham’s condition. Tinkham said, “The surgery was scheduled [immediately], and I was able to get in to have the brain surgery. So even that alone was a miracle.”

This chance meeting changed Tinkham’s life forever, she said. “When we are at the point when there is nothing we can do, that is when we can stand back, and we can feel God’s hand in our lives.”

When we are at the point when there is nothing we can do, that is when we can stand back, and we can feel God’s hand in our lives.

After reaching the point where she had done all she could do, Tinkham said God stepped in and took care of the rest. “I had no doubt in my mind that that was a miracle. God had answered all of my prayers by sending this angel into my life.”

The healing process post-surgery was slow and difficult, but Tinkham said she felt as though she had been given a second chance. Even in her darkest moments, Tinkham testified God never left her side.

Growing up in Laie, Tinkham eventually attended BYU–Hawaii, where she studied political science and Japanese. She went on to work in the U.S. Senate for the Secretary of the Senate, the Hawaii Attorney General’s Office, the Hawaii State Supreme Court, and the Hawaii State House of Representatives all as an undergraduate.

She served in the Japan Nagoya Mission for the Church.

Upon her return, she attended the J. Reuben Clark Law School in Provo, Utah, where she studied international law and alternative dispute resolutions.

While attending law school, Tinkham was editor-in-chief of BYU’s International Law and Management Review Journal. She then went on to complete a master’s of Public Administration from the Marriott School of Management. 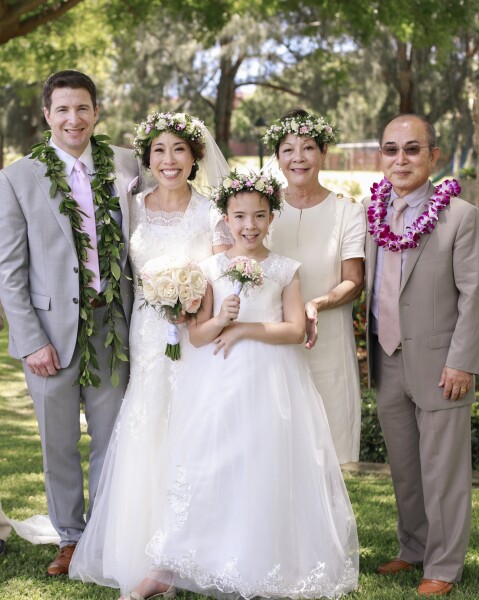 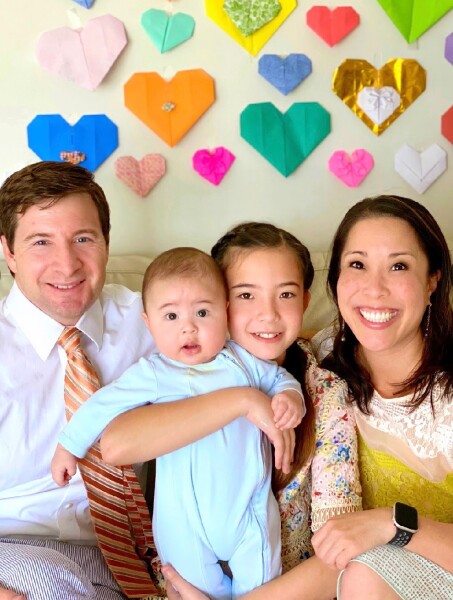 Tinkham’s husband, Nick Tinkham, said he is grateful for his wife and her “tenacious love for the Lord, our family, and the community.” He said, “Whether spending time with our children, lending a hand to her parents ... or teaching BYUH students, she gives her whole heart and soul, and we know she loves us.”

As a professor, Tinkham’s love and desire for her students to succeed is something she says is a gift from God. “If I could tell my students anything, it would be to believe God.”

Tinkham said she wants her students to know they are not alone. She said she felt alone as she was going through her trials with hemifacial spasm. “Little did I know that somebody just down the street from me would have the exact same condition.”

She said to think of trials as opportunities instead of obstacles. “They are blessings because they refine us so that we can be better able to do what God needs us to do ... I always tell students we are going to start together, and we are going to finish together stronger and better.”

Terrence Dela Peña, a senior majoring in political science from the Philippines, works closely with Tinkham as both her student and her teaching assistant. He said it has been a privilege to work with Tinkham. “Her bright personality radiates wherever she goes. Her willingness to help students succeed goes beyond the classroom.”

Dela Peña said Tinkham made him and other students feel welcomed as a member of the BYUH ohana. “She inspires me to dream big, believe in myself, and work hard to achieve my goals. Professor [Tinkham] is a true disciple of Jesus Christ, and I am eternally grateful for her example.”