For former BYU–Hawaii President John Tanner, and his wife, Susan Tanner, the end of the Spring 2020 Semester closes five years of steering the university towards Zion. The Tanners shared their love and gratitude for meaningful interactions with faculty and students, trips to Laie Point and connections to their ancestors and the Pacific.

“People have said this must be a bittersweet time. It’s not bitter. This continues to be a sweet experience, but it is a poignant time for us because we love the university and we love the community. We’ve given our hearts to this assignment,” said John Tanner of his reaction to his release as university president.

Susan Tanner added they prayed every day, expressing gratitude for the opportunity to serve at BYUH. “We feel like Heavenly Father has granted us the most special blessing in the world.

“I’m not sure if you’re ever ready to give up something that you love so much.”

“Every Church assignment has a release built-in,” explained President Tanner.

“We know that, and we believe and support that. But of course, we will miss this assignment and opportunity. And I have to say that being president hasn’t been all sweetness and light. We have had challenges, as every assignment does.”

As she reflected on her time at BYUH, Susan Tanner said she loved watching the excitement and anticipation of new students each semester, as well as the confidence and accomplishment of graduating students. “I love beginnings, and I love endings ... As we’ve been looking back now on our time here, it’s been fun to feel the university’s growth.”

President Tanner added this ending has been difficult for him because the campus has been so empty due to the pandemic.

He said one of his earliest memories at BYUH was waking up early one morning after his presidency had been announced before their first semester began. He said he remembered walking out and looking up Kulanui Street and Hale La’a, seeing the temple. “I felt this real, strong sense that this university needs to be connected to and worthy of the temple.”

To end with the temple closed and activity level on campus at an all-time low, an area President Tanner said he has sought to improve during his time here, has made it difficult to say goodbye.

He added he would just as soon slip out the back door without any fanfare, but he wants the BYUH and the wider Laie community to know he loves serving alongside them.

“Our deepest desire is [for them] to know how much love and gratitude we have for everyone at this place. We have just been showered with aloha from day one,” said Susan Tanner. 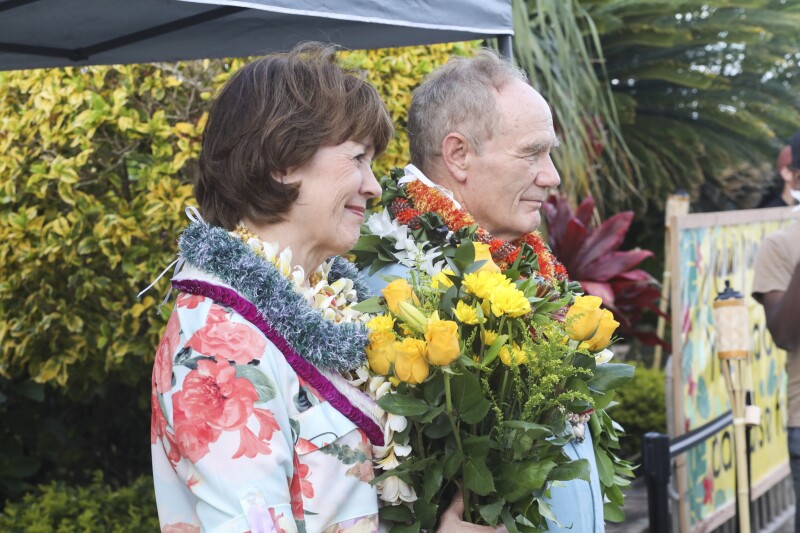 President Tanner said due to the pandemic, he worried about how to continue to remotely provide the interactive, intercultural learning experience that is consistent with the mission of BYUH.

But this is just one of the challenges the Tanners said they have experienced during their time at BYUH.

When things got tough, the Tanners explained, or they started to feel a little discouraged, they would go out and find students or faculty, invite them to dinner and hear what brought them to BYUH.

“This is a place that’s mission-centered. People would often tell these remarkable stories of how the Lord brought them to BYUH, and it would lift us, inspire us and give us a new shot in the arm when things got hard,” said President Tanner.

“We have felt the university’s mission so strongly in our lives, and so to have that renewed in our mind is what would get us through difficult things or hard times,” Susan Tanner added.

She reminisced about how her husband would often come home around 6 in the evening with all the worries of the university weighing on his shoulders. They would go out to Laie Point to let the wind blow through their hair and admire the beauty of the island.

She explained how the physical beauty of the surrounding landscape renewed them as they felt the presence of God. President Tanner added he would even occasionally go out and boogie board, especially after hearing he would be released.

The Tanners shared their ancestors translated the Book of Mormon into Hawaiian and Samoan languages and were deeply enmeshed into the Polynesian cultures.

Susan Tanner explained she read anything she got her hands on about her ancestor, George Q. Cannon, to learn about his missions to the Hawaiian Islands.“I just hungered for connections to him.”

She added she often looked at the portrait of George Q. Cannon in the Laie Hawaii Temple. “I would look into his eyes and think, ‘I want to be worthy to be your granddaughter. I want to give and sacrifice and love in the same ways that you have here.’ [That connection] has had an impact on me. I have felt his presence and his spirit.”

She said she thought about the sacrifices her grandparents made to serve a mission in Hawaii as a young married couple, including giving birth to their first child away from family.

President Tanner added it was sweet to have celebrated the 100th anniversary of the dedication of the Laie Hawaii Temple during their time here, especially after discovering his wife’s grandparents were present for the original dedication in 1919.

He said his connection to the Pacific is with Samoa, where his grandfather served three missions. His grandfather, who oversaw the translation of the Book of Mormon to Samoan while serving as a mission president when he was about 28 years old, stopped in Hawaii on his way home and spoke in sacrament meetings in Laie.

President Tanner shared during their first visit to BYUH campus, years before being called president, he and his wife stood under the newly erected statue of George Q. Cannon and Jonathan Napela, and talked about their ancestral connections to Hawaii and Samoa.

As they talked, he said he wondered if they would have any personal connection to the Pacific. “We raised that question, but never thought that we’d be back to follow in the footsteps of some of those pioneers of the Pacific... So that’s given this a special, personal, family-history connection.”

Zion as a goal

In his inaugural address, President Tanner stated, “I see a university that is intended to be not only a ‘school in Zion’ but a Zion university,” and continued to refer to that idea throughout his time at BYUH. He further explained in his farewell devotional speech that he used “Zion” as a shorthand “not because I ever expected to dock in a harbor called Zion but because I believe we are better for steering toward it.”

He further stressed it was not his directive, but rather a concentrated effort to echo and reanimate statements of past prophets in a way that would help the university strive to be better.

“We’re better off for striving to be better with high aspirations, even when we fall short, than we are when we aim low. ... That vision of a Zion university is something that has guided us, and I hope will continue to guide the university, whether the new president uses that phrase or not. I can tell already that he’s committed to the university’s prophetic vision and that’s the important thing.”

Susan Tanner added she has long loved the idea of Zion and has appreciated the reiteration of it as a metaphor for what the university is seeking to be. “We’re progressing on the road to Zion and a Zion university,” she said.

President Tanner added he deliberately used the word “savor” of Zion in speaking about Zion in his inauguration. “You experience something here that’s really special and makes you want to take that into the world and replicate it.

“It doesn’t mean you’re perfect, or that you’ve arrived at Zion, but you’ve experienced something here that has a special flavor.”

Susan Tanner added, “Hopefully that means we’ll take a little piece of Zion with us wherever we go.”